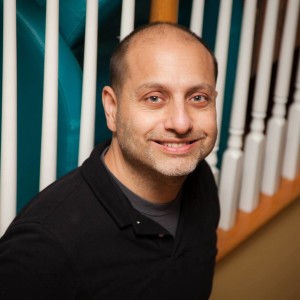 Don Stevens lives in the Finger Lakes area and loves local food and wine. He writes and reviews wines for his marketing business and plans on releasing more wine mysteries.

Don Stevens is writer and web marketing specialist in the Finger Lakes area. He is a freelance writer and has worked with several wineries, and other businesses to help promote the Finger Lakes area. He has served on several regional boards, committees, and organizations, and has written several articles about the area. His passion for wine has kept him involved in an area noted as a top wine destination in the world by Wine Enthusiast. Writing is his other passion and there are many stories he has yet to tell. A real life gypsy, he worked the carnival circuit traveling the East Coast. While on the road, he read classic mysteries and was inspired to combine his passions to produce this series.

When he’s not writing fiction, Don is busy running Finger Lakes Copywriting and Merge Publishing. For leisure he enjoys wine tasting, painting, cooking, reviewing, and blogging.  He is also a contributor for Independent Book Publisher’s Association, board member of the Canandaigua Wine Trail, and is very active on social media. Don is married and lives in Syracuse, NY, where he is discovering new talent at the CNY Creative Writer’s Cafe.

A Taste for Death 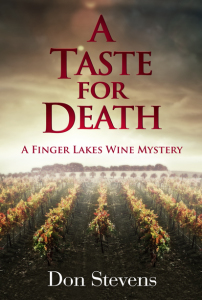 A Taste for Death is a mystery set in the Finger Lakes Wine region of Upstate New York. The novel has complex characters with troubled lives. Investigator Deville is a recovering alcoholic who suffers from amnesia. While working on the case, he unravels mysteries of his own past, while trying to repair his current life. Wine critic and writer Gerard Bellamont’s welcome to the Finger Lakes region was far from friendly. Some would even say his murder was of no surprise. The wine owners did not take the critic’s words lightly and his days had been numbered. Besides writing reviews, there had been more than one lead connecting the victim to the suspects.

Gerard Bellamont, a famous wine critic with French roots, is found strangled with what appeared to be trellis wire at Allenwood Vineyard, where he was one of the guests to a party the previous night. At this party, Bellamont was heard saying something odd when staring at one of the local wine bottles, “I didn’t like it the first time I laid eyes on it”. Investigator Deville, also originally from France, remembers the victim briefly. The crime scene disturbs him, triggering his memory about his own past. He arrived in the United States in an alcohol induced coma which caused amnesia.  Many parts of his past unveil itself as he investigates. Many suspects had a reason to kill Bellamont, his wife, his teenage son, the woman he was having an affair with, plus the owners from the winery he gave merciless reviews. Three wineries are always in the picture: Allenwood Vineyard, Owen’s Winery, and Catalina. Which winery has the most to gain and who was responsible for the death?

What Genre is Your Book?

A Taste for Death is the first Finger Lakes wine mystery. It is a detective whodunnit for wine and/or mystery fans everywhere. It is ideal for anyone who loves a good traditional puzzle with complex characters.

Inspector Louise Deville is a transplant from France, where the victim is also from. He remembers small fragments of his life in France, but these memories are buried, the result of a tragic accident of alcohol poisoning. While working on the case he slowly develops dark memories of a vineyard, snippets of a caring mother, and a possible crime involving his father. These memories are keep him from ever drinking again, a struggle which makes working in wine country a challenge. As he solves crimes among the vineyards of Finger Lakes of NY, he digs deeper in his own past, hoping one day to discover the truth.

What Made You Write This Story?

My passions of wine and writing are combined with this series. I grew up reading Christie, Marsh, and other whodunnits, and love a good puzzle. It seems perfect to align an engaging story with the background of a winery. The parts of a winery, the soil, vines, and the process of making wine, are filled with mystery and are fascinating; and the people who own and run these businesses lead lives intriguing enough for their own stories.

Who should read your book?

In addition, this detective story is a modern mystery in a traditional British style, fans of Louis Penny, Elizabeth George, and Charles Todd will enjoy this series.